If you’re selling experiences, copies and forgeries will not devalue that experience if your experience is truly worth experiencing. 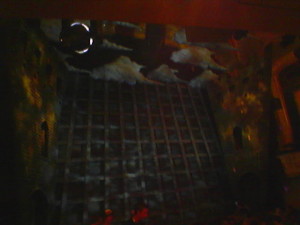 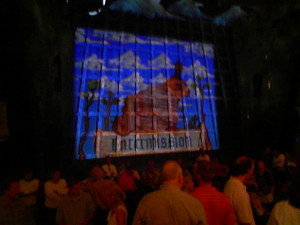 Many years ago, I saw Spamalot, the Monty Python musical. Immediately after taking the photo of the intermission curtain, an usher rushed over to tell me what I did was against the law and insisted that I delete it right there in front of him. (Obviously I faked deleting them.)

Yes, those crappy, crappy photos were taken illegally. Seriously, cell phones are banned in NYC theaters. But what’s the point of prohibiting photos when it’s the experience of being there that’s valuable? 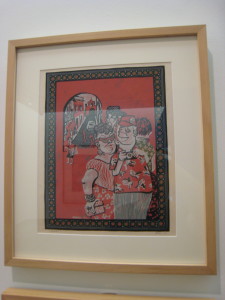 Before I took this photo, the docent caught me with my camera out. He said, very politely, “please no photos of the art here,” and disappeared. A moment later, he peeked his head around the corner. With a smile, he said, “well, you can take that one,” then disappeared again.

It’s as if he secretly wanted me to share the art but had his hands tied, so he let me off the hook just this once. I only wish the photo had come out better to do him proud.

Finally, here’s one of several I took at the David Byrne/St. Vincent tour a while back. 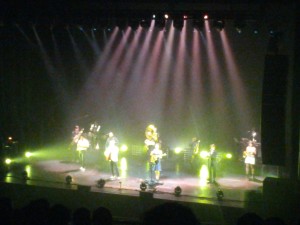 Before the show began, David Byrne came over the PA and said, “we encourage you to share photos and videos of the show because we’re proud of we’ve done.” You can find thousands of videos uploaded to YouTube of their wonderful concerts. It was a fantastic show. Do yourself a favor and check out any of their renditions of Road To Nowhere.

It all comes down to ownership and fear.

For the person who “owns” what I’m taking a photo or video of, they’re afraid that my photo or video will devalue the real thing. Spamalot will lose a patron because he saw a video of it on YouTube. The San Juan art museum will get one less visitor because she saw that print in my photo. David Byrne will sell one less ticket because the whole tour is on YouTube.

I record my experiences for a few reasons — to remember what I’ve done and where I’ve been, to brag about what I’ve done, and to share a piece of what I experienced. Nothing can (yet) reproduce the amazing experience of “being there,” and so photos and videos are the next best thing.

It’s not the “real thing,” so why put handcuffs on what gets shared? For example, after the very first performance of Spamalot, there are no more secrets. Word will get out about how good or bad the show is. Video and audio will leak. The public will determine its success by buying tickets. I saw it twice because I loved it the first time and wanted to share the experience with a friend. If my second viewing was via cellphone video instead, it wouldn’t be the same.

So ask yourself what’s really precious. If the experience of being there in person is the valuable part, then it doesn’t matter what people share about it. In fact, sharing can encourage more people to experience it in person.

A friend asked me for advice. He was wondering who should be allowed to attend the launch of his Awesome New Thing. Specifically, he was concerned that some of the attendees might try to steal his ideas for their own.

I said, “If your ideas are good, they’ll absolutely steal them. The question is — what is it that they can’t reproduce? What makes your experience unique?”

Because if you’re really onto something, the best validation you can receive is when someone shares the experience with someone else or when a competitor imitates you. So why delay the inevitable? Encourage it instead.

One Reply to “You’re not supposed to see this”