Corey had the line of the day at SXSW:

“User-generated content. Can we come up with a better name for that sometime over the next week?”

I couldn’t agree more. It’s a phrase whose time has come to an end, just like “user-centered design.” I wouldn’t have a problem with it if it was called “Dave-centered design” but first I’d have to get over my self-consciousness as researchers follow me 24-7, observing my showering habits to help them create a better bathroom clock/radio

The problem isn’t either of those phrases; the problem is the word “user”. Yes, I busted out the quotes — the word tongs as my former prof Geoffrey Nunberg calls them — because I’m keeping that word as far away from me as possible. I don’t want anything to do with that word ever again. 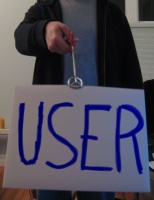 It is the most de-humanizing word that you can use to describe activities that are done by humans — humans viewing and interacting with your own website. These people are devoting their time and attention to your site. Calling them “users” takes away the fact that there is a person sitting in front of her computer, reading my text, reading five other web pages, updating her MySpace profile, carrying on ten instant messenger conversations, listening to music, and watching the TV all at the same time.

I’m a human being, and the last thing that I want to be thought of is a person spending all of his time on MySpace. I want you to know that there’s more to me than blogging and commenting and watching YouTube videos. You hide my complexity as a person when you call me a “user” and contextualize my activities solely in terms of your website. Disregarding that complexity is the first step in the downward spiral of bad user research, feature development and prioritization, bad user experiences, and ultimately the kind of thing that I want to keep you away from as you read my future digressions.

So what should we call “users” instead?

Metonymy is a figure of speech where you substitute the name of one thing for something else. For example, you could refer to the British royalty as “the crown”. If you have a video site, instead of using the word “users” you could just as well call them “play button pushers” or “eyeballs” or “lazy”. Well, maybe not lazy. Maybe not eyeballs either. Obviously my imagination is broken tonight. But don’t let that prevent you from getting creative with your names; metonymy is a great place to start.

Call them what they call themselves

This is my favorite strategy. If you have a site for people who produce video clips distributed on the Internet, you probably shouldn’t call them vidiots (and you certainly shouldn’t call them “stupid”). They most likely call themselves vloggers. Calling them by the name they call themselves shows that you respect and understand them. And in case you hold that label in low regard, it’s best to hold back your laughter until after you have some privacy (vloggers *hee hee*).

Give them a name, individually

Persona development is one of the best techniques for getting everyone to understand who makes up your target audience. A persona is an imaginary person who idealizes the typical person using your product. The number of personas you need depends on your audience, but a two or three is usually enough to focus your discussions. Instead of asking whether or not your “users” would like some new idea, instead ask if Bob, Laura, and John — your personas — would like it. I’ll write more about personas in a future post.

Yeah, “branding” sounds like an evil marketing word, but damned if I wasn’t a proud member of the Nintendo Fun Club back in the day. A brand is fine as long as they adopt it too. Green Bay Packers fans happily accept the moniker “cheeseheads”, but you would never call them “Green Bay Packers users” (and the eerie connotation that phrase has). Branding the people on your site gives them an automatic identity — something to share with the other people on the site and a way to know whether you’re “in” with the group already or “out” and need some enlightenment.

Call them what you call them

What do you call your friends? Your former schoolmates? The people on your co-ed soccer team? Call them something real like “humans” or “people” or “friends” or “buddies” or “teammates” or “those people we talked to at the conference” or “that chick I woke up next to after that night we got really shitfaced”. Something like that. But if you’re homophobic, you should watch what you say around fans of Gay.com. Just a friendly warning.

Last words on the word

Give them a name that you would be willing to say to their face, that they wouldn’t be upset or embarrassed about if you said it with them standing right next to you. They’ll appreciate the attention and identity you give them, and you’ll have a friendlier word to use when you talk about them

And remember – these terms are shibboleths; if you don’t use them or use them incorrectly, the people you’re referring to will know you’re an outsider. Incorrectly calling a blogger a “web logger” is a bad idea. Also, there are some times you can’t use the word that these groups call themselves. The “n*****” word comes to mind as an example, so always be careful that you’re not inadvertently hurting their feelings by the name you choose.

Finally, you need to do the legwork to figure out the best term to use when talking about the people on your site. You’ll be amazed at what you discover. For example in my final project at Berkeley, Megan and I studied Berkeley freshmen and their technology habits and histories. Even though the students we interviewed were 17 or 18 years old, they sometimes referred to their friends and schoolmates as “kids”. Megan and I could use that word when asking our questions to them too (despite the fact that we weren’t much older than they were).

Good luck finding your own term to replace the word “user”. Hopefully the last days of the phrase “user-generated content” are finally at hand…